skip to main | skip to sidebar

Cloudy and chilly today - we left the lake at 9:55 and traffic was heavy especially in the eastbound lanes.    About 1 hour into the trip, a rock hit the windshield and made a quarter-size chip - ugh ugh!    Mark was driving and it's just to the right of his vision.    While I was driving, he checked in with State Farm and all set to have it replaced at Eastland Suites Friday morning.

We stopped at a rest stop and fixed some sandwiches as we had cooler with us - ham/colby jack/dijon mustard on multi grain bread!    Sooo many people traveling and gas stations, rest areas, drive-thrus all super busy so did not want to hang out with a lot of people.

We are in Clarksville, TN tonight and nice to gain back that hour.    About 15 miles from our destination, it started to rain.    After checking the forecast, Mark decided to take this route instead of Lexington where rain/snow is predicted for today/tomorrow.    We are to get rain now into the morning and changing to snow, but hopefully we'll run out of it soon???

Cracker Barrel is just across the street - Mark picked up 2 chicken pot pies and we enjoyed some good ole comfort food in the warmth of our hotel room - it's really chilly out there and we're going to be in for some cold temps in Bloomington this week - sooo spoiled after the gorgeous weather at Lake James.

Zoom  with all 12 siblings - talked about what we did for Thanksgiving, decorating for Christmas, the reveal of Jim and Lydia's new (grandson) coming in April, Sharon telling us about Sarah's engagement, etc...

Scary hearing about the concern, worry and threat of massive outbreak of Covid after this holiday weekend.    Stay safe and healthy!

Nice clear day with no morning fog!    Anne and the boys were off early heading to home sweet home and see their sweet Gibson who has been well taken care of by 2 neighbors while they were gone.

We had breakfast and then started in with the packing and loading the car for our departure tomorrow.   We had planned to leave Monday but decided to do it in 2 days again and weather was definitely a factor with rain coming tomorrow turning to snow on Monday!!!

We had a virtual mini euchre tournament last night - Scott (Brooke's brother) and I were the champs!   Philip and I won the tournament (much bigger) on Easter Sunday - I'm on a roll!!!😊

Mark and I walked late morning - several of the others played pickleball.     Lunch and then at 2:15, 8 of us went on an awesome hike on the Mountain Overlook Trail.    Just spectacular weather and ended up at the Fonta Flora Brewery where we enjoyed beer and wine and sat outdoors on picnic tables which were spread far apart - lots of families here today. 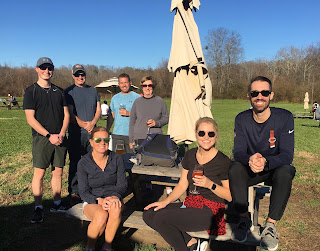 The hikers:  Drew, Michael, Ryan, Theresa, Brooke, Jessa, Justin
Anne, Liam and Connor arrive home around 6 tonight!     Gibson was very happy to see them!
Tonight we all gathered together for one final meal this Thanksgiving weekend - 3 kinds of soup (chili, chicken enchilada and Italian Wedding) and ham/cheese sliders.   Yummy stuff!!!    Lots of good chatter and wine made for a fun time.    Really enjoyed having Justin and Jessa, Mike and Theresa with us this weekend! 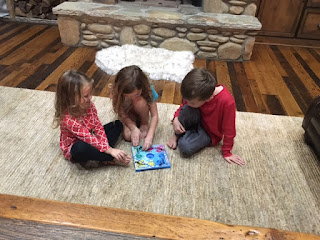 The Munchkins having some quiet time! 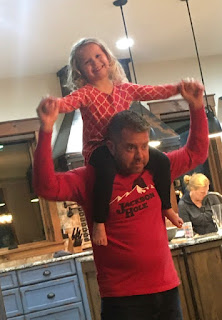 Uncle Ryan and Maeve
Tomorrow.....back on the road and heading to Bloomington! 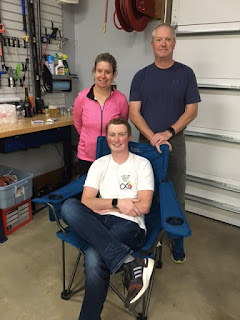 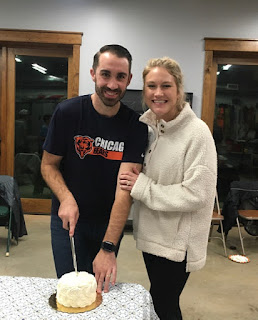 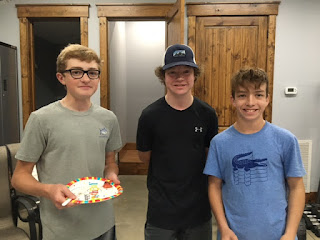 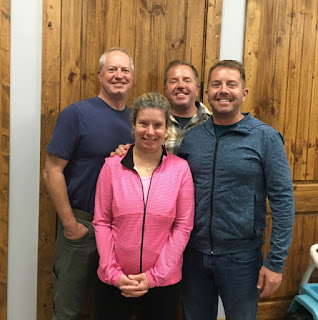 So proud of our kiddos
I should explain that some of the family did get tested a few days ago and were negative, so that's why we were able to all be together!
Congratulations to our niece Sarah and Daniel on their engagement last night!    Sarah is the daughter of Mark's sister Sharon.

Very foggy again this morning but burned off much earlier and was another spectacular day at Lake James - sunny and 70ish.

Michael and the 5 boys went golfing along with nephew, Justin and Brooke's brother, Scott.

Anne went to Morganton for gas and groceries.    Mark and I did some organizing in the car

Been listening to the Christmas tunes - this year, all bets are off as to when people should decorate, enjoy the holiday music, etc.......been a tough year and time to enjoy a little bit of Christmas early - but never forgetting yesterday and all the gratitude on Thanksgiving.

Had a little birthday luncheon for Anne with the girls, plus Mark, Mike, Ryan and Philip.  Great food and so nice sitting outside in the warm sunshine. 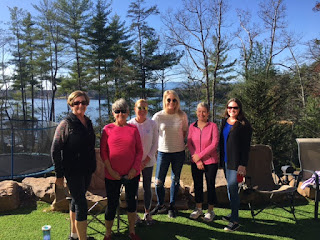 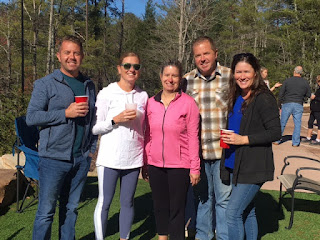 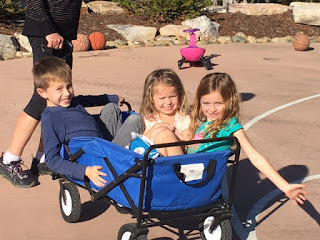 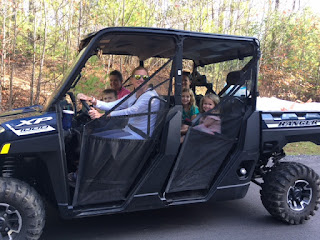 All aboard to do a garbage run....Anne, Jinx (dog), Luke, Brooke in front
Annette, Blair, Maeve in back

Theresa, Jessa and I went for a long walk in the afternoon and then Mark took Theresa, Mike, Anne, Jessa and me on a pontoon ride to Philip and Annette's.    We toured Ryan's new carriage house (above Philip's garage).    It's not totally done but a lot has been done since we were there in May.    Very nice home away from his Memphis home.

to you and yours!

This holiday will definitely be memorable - very thankful that all our family could be together even though we are not eating together, posing for a family picture and I'm sooo missing all those hugs.    And as we had expected to originally have 28 in our gathering (distancing, of course), our little group here at Michael and Brooke's will be just 13 with Mark and me eating in the cottage.    Despite all the turmoil and sadness this past year in our family and across the country, we have so much to be thankful for and those are the blessings we will focus on today!

After a rainy night, it was very foggy over the water till 11:30 and then cleared up to 65 and lots of sunshine!    Mark and I went to Mass with Bishop Robert Reed in Boston - what a great message for this Thanksgiving

We ate at 5:30 - what a feast (2 kinds of turkey, ham and all the fixins')!    Our nephew, Justin and his bride of one month, Jessa joined us from Charlotte!

Even thought we weren't all "together", we had moments of "girl chatter and wine" in the kitchen and around the fire with the guys!    Just not as normal as usual, but still fun!

Thankful for you faithful blog readers !     😊

We read and played euchre online.    Did some laundry and then a big change came about with our Thanksgiving plans......since Michael and Philip were possibly with a friend who tested positive, we have drastically downsized our gathering for tomorrow.    Michael, Anne and families will be together    Mark and I will be in the cottage;   Philip and family, Ryan, Mike and Theresa will stay at Philip's house.    Brooke's family will not be coming.....😞😞😞    So disappointed!

Despite the weather, the guys had fun golfing.    Theresa and I chose NOT to walk in these less-than-pleasant elements!

Mark picked up some yummy goodies from Roma's (locally owned Italian family restaurant) tonight - we shared a Stromboli, fried ravioli and then strawberry cheesecake for him and a cannoli for me - plenty of leftovers!    Oink oink🐷

Mark C and Nancy beat Mark F and me 2 of 3 games of euchre tonight!

Click on Picture to see where we are located on Catrina